The Manitoba Conservation site on the Brokenhead Wetland Ecological Reserve can be found: Here

Press coverage of the announcement by Conservation and Water Stewardship Minister Gord Mackintosh on the expansion of the Brokenhead Ecological Reserve can be found : Here

The Brokenhead Wetlands was formerly known as the Scanterbury Bog. Scanterbury then was a tiny siding on the railroad between East Selkirk and Beaconia (where the railway turns east to Stead and then north to Pine Falls). The southern portion of the wetland is bisected by Highway 59; the main remaining wetlands are just west of Highway 59, north of the junction with secondary Highway 219 to Stead. The Brokenhead Wetlands is home to 23 species of rare and uncommon plants, and 28 of Manitoba’s 37 native orchid species, including the globally rare Ram’s-head lady’s-slipper.

People have been attracted to this wetland for many years. The Brokenhead Ojibway Nation has been using it for approximately 300 years and they continue to regard it as a place of great cultural importance and for collecting medicinal plants, tea berries and cedar. The traditional use of the wetland by the Brokenhead Ojibway is a way in which tradition permits a community to become intergenerational. A community is a form of cultural institution whose members uphold some central traditions over time even as values change. Cultural heritage is important in maintaining a historical sense of community. Conserving the Brokenhead Wetland is an important step towards conserving Brokenhead Ojibway culture. To allow this valuable area to disappear would be to impoverish the descendants of the Brokenhead Ojibway of a part of their culture and deprive future generations of Manitobans of a part of their natural heritage.

Native Orchid Conservation Inc (NOCI) became interested in this wetland when we became aware of a move to pump water from it to top up the water levels in a nearby recreational lake and for a large well. We knew drainage of the wetland would affect its hydrology and have a negative effect both on the ecosystem and the rare orchids and other plants found there. As well the wetland was fixing carbon, replenishing the aquifer and helping to prevent droughts and flooding in the surrounding area. The Brokenhead Ojibway Nation was also very concerned about the wetland for cultural reasons as well as for their own water supply because of their close proximity to it.

In 1998 and 1999 we conducted a plant survey of the wetland prior to nominating it as a candidate for an ecological reserve. In 2005, Premier Gary Doer declared a 563-hectare portion of the Brokenhead Wetland the Brokenhead Wetlands Ecological Reserve. Three times the size of Assiniboine Park, it includes a calcareous fen, a wetland type considered rare worldwide. This fen is the keystone of the ecosystem. If compromised, the rare plants in it will surely die off.

In January 2007 a new not-for-profit organization, Debwendon Inc., was created to help preserve the ecosystem and the cultural practices that depend on it. Debwendon partners include NOCI, BON and MbMF. Work is continuing to develop an interpretive trail and boardwalks on Crown land adjacent to the ecological reserve so people can visit the wetlands safely without damaging it. In September 2011 the late Eugene Reimer donated a substantial amount of money to the Winnipeg Foundation to set up the Eugene Reimer Environmental Fund to provide an annual grant to Debwendon for maintenance of the trail and boardwalks in perpetuity. In response Premier Greg Selinger announced funding of $1,000,000 in support of this project in October. Eugene was a former board member of both NOCI and Debwendon and a dedicated naturalist. We are sad he is not here to celebrate this special day with us.

Today Minister McIntosh has announced the expansion of the Brokenhead Wetlands Ecological Reserve effectively doubling the size of the protected area. This will ensure an adequate buffer zone around the most sensitive areas.

On behalf of NOCI I would like to thank the Province of Manitoba and the Dept of Conservation and its employees for their support of our group and our projects, especially this one. The protection of this rare wetland was the reason NOCI was founded but we couldn’t have done any of this without your help and the cooperation of our wonderful partners, the Brokenhead Ojibway Nation and the Manitoba Model Forest.

The Brokenhead community especially Carl and Lawrence Smith and Paul Chief stayed with us working on this project for the past 14 years and never lost faith that we would eventually get it done. They gave us permission to turn part of their land under their TLE into a protected area beneficial to all Manitobans. They gave us a place to meet, they shared their knowledge of the wetland plants and their culture with us and made us feel welcome and we are very grateful to them.

The Manitoba Model Forest was helpful in so many ways. They helped us with funding on many occasions and initially with printing up our first brochures under Mike Waldram their first general manager. Mike joined our committee and was always a ready source of advice and encouragement. This continued under Brian Kotak, when they remained members of our committee, gave us work doing plant surveys in Nopiming, and gave us advice and support when they thought that would be helpful. I can’t tell you how valuable their work in this area has been to us and to many others…

Thanks to NOCI board members past and present and especially to Mike James for allowing us the use of his lovely interpretive centre today and for organizing everything so well. We also appreciate the superior barbequing skills of the Woodlot Association of Manitoba. It’s a pleasure for me to be here today and I hope you will enjoy the day, view the displays, go for a walk in the bog or the forest, eat some cake and have fun. Thanks for sharing this day with us.

Photography by – Will Milne 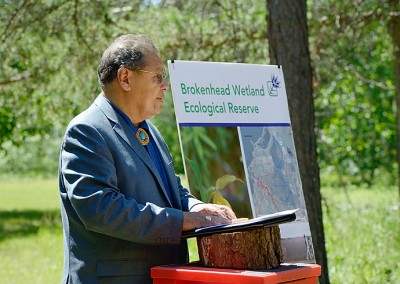 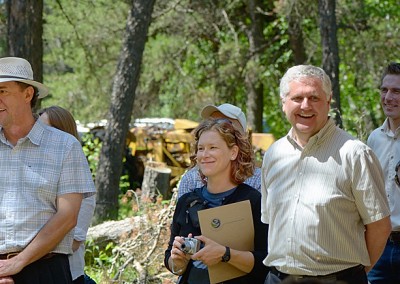 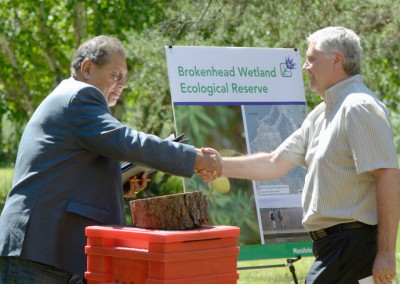 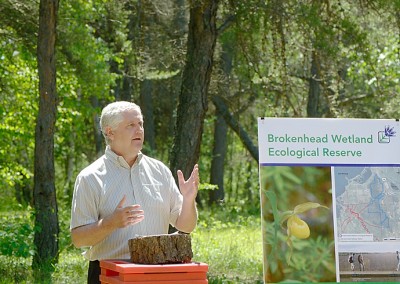 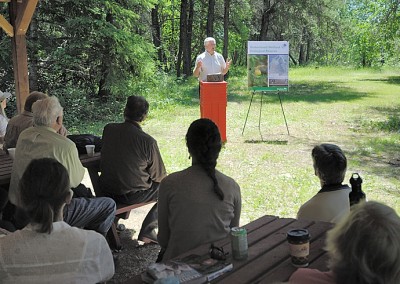 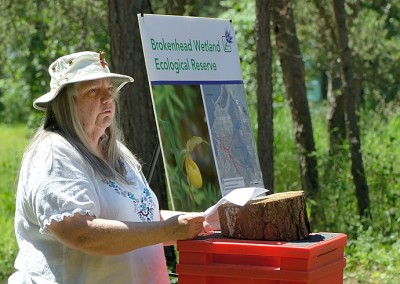 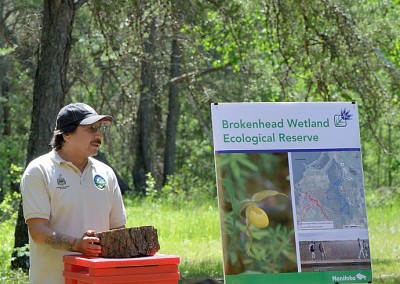 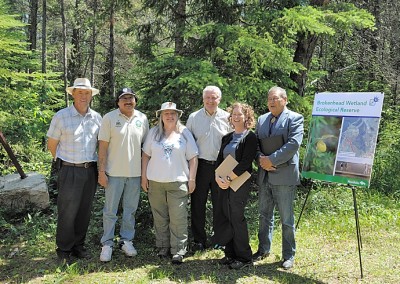 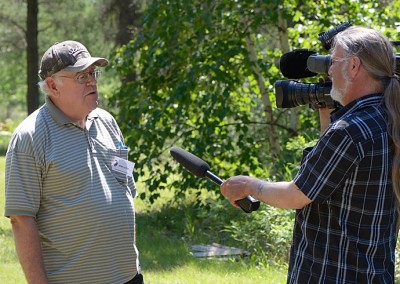 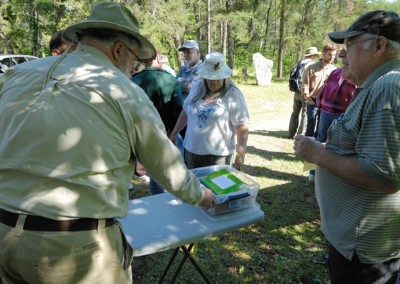 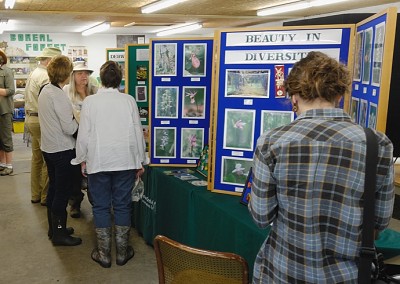 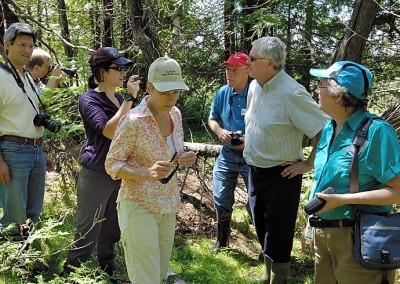 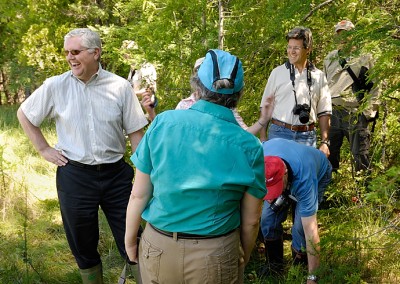 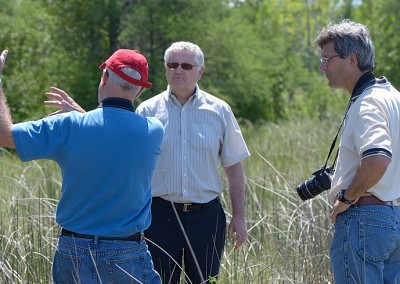 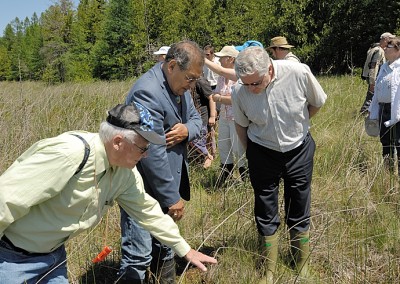 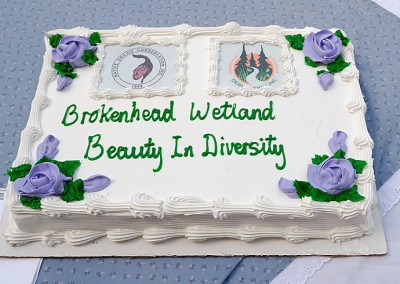