A new, $1-million interpretive trail and boardwalk next to the Brokenhead Wetland Ecological Reserve will make the wetlands more accessible and highlight many of their unique and rare features, Premier Greg Selinger announced today. “This new resource will allow the public to safely visit the area without causing damage to the fragile native plants and their habitat,” said Selinger. “I especially want to thank our partners, Debwendon Inc. and Eugene Reimer, for their support in making this new trail possible.”

The Brokenhead Wetland Ecological Reserve was established in 2005. The 563-hectare parcel of land is located along PTH 59 northeast of the Brokenhead Ojibway First Nation and features 23 species of provincially rare and uncommon plants, 28 of 36 native orchid species including the ram’s head lady’s slipper (Cypripedium arietinum) and eight of Manitoba’s 10 species of carnivorous plants. The Brokenhead wetland is a calcareous fen, a wetland type considered rare in North America. A fen is a kind of peatland known for its variable water levels. Groundwater and surface water movement is a common characteristic of fens and can be observed in the surrounding rare white cedar forest and at the forest/fen interface.

The premier noted, Eugene Reimer, a long-time naturalist and board member of Native Orchid Conservation Inc., has donated a substantial sum to the Winnipeg Foundation to establish the Eugene Reimer Environment Fund. The fund will provide an annual grant to Debwendon to maintain the Brokenhead Wetland Interpretive Trail. “It brings me great joy and satisfaction to make a contribution towards protecting these wetlands where I spent so many happy hours enjoying and learning about nature,” said Reimer.

This initiative supports the province’s trail-based tourism strategy, which focuses on engaging tourism and service providers to capitalize on the potential of outdoor recreational tourism. Since 2001, the province has invested more than $27 million in trails funding including $12.8 million for Winnipeg trails and $1.4 million to complete the Border to Beaches active transportation route, which stretches 370 kilometres from the Ontario border to the beaches of Lake Winnipeg.

Construction of the Brokenhead Wetland Interpretive Trail will begin in 2012 and take approximately two years to complete, said Selinger. 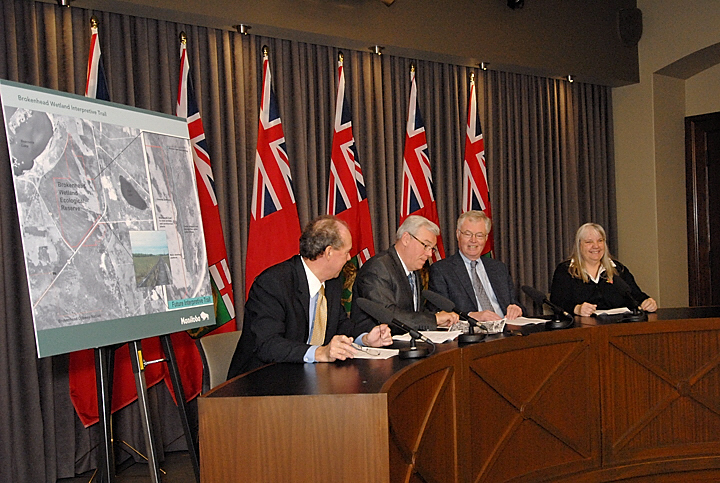 Todays announcement was the culmination of a co-operative effort between the Brokenhead Ojibway Nation, Native Orchid Conservation Inc. and the Province of Manitoba spanning a number of years. Representatives of all parties attented the announcement.  There was an air of genuine celebration in having arrived at such an important milestone in the history of the Brokenhead Wetlands. 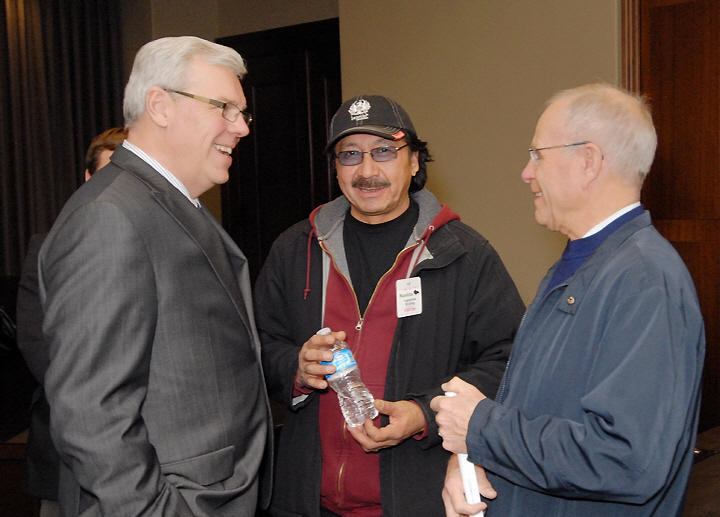 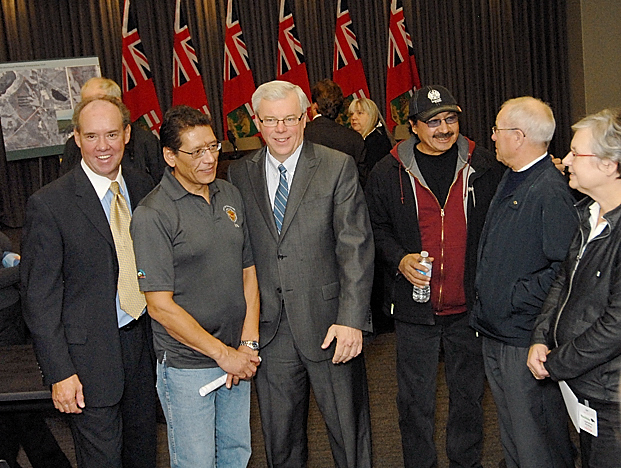 As the official announcement notes, this major step forward in protecting the Brokenhead Wetlands and creating a means for all people to experience the remarkable beauty and diversity of this unique area, has been blessed by the generosity of long time NOCI and Debwendon Board member,  Web site designer/ Webmaster and NOCI Treasurer – Eugene Reimer. 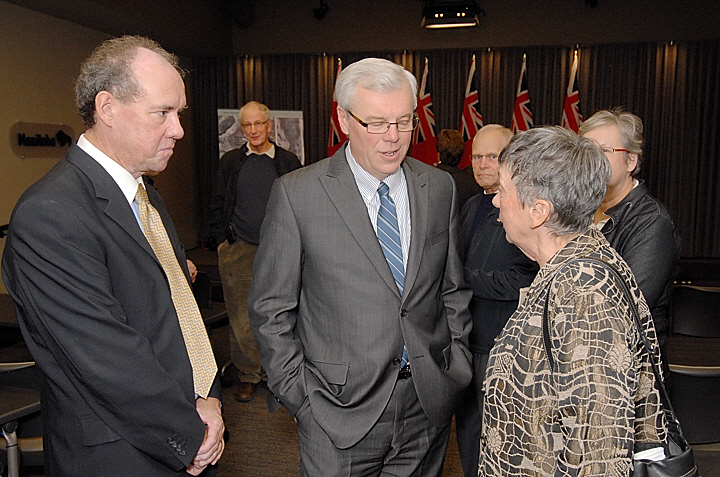 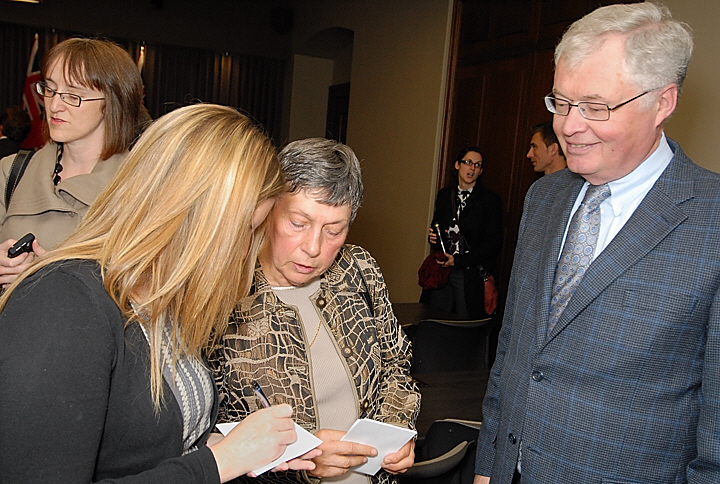 Doris Ames – NOCI President delivered a delightfull speech which acknowledged the many individuals whose dedication and commitment over the years , contributed to the realization of todays announcement……….

“Premier Selinger, Mr.Dewar, Mr. Frost and all of our friends and bog-lovers here today:

It meant so much to me to hear Premier Selinger’s announcement that Manitoba Conservation is moving ahead with design and construction of an interpretive trail and boardwalk adjacent to the Brokenhead Wetland Ecological Reserve. Not only because this project will protect such a rare and unique wetland but also because getting to this point required such an enormous commitment of time and effort from so many volunteers. Some of us have been working on protecting this wetland since 1998. The first people to have the vision to lobby for the protection of this wetland were the late Bud Ewacha, the founder and first president of Native Orchid Conservation, Elder Lawrence Smith from the Brokenhead Ojibway Nation, the late Mike Waldram, general manager of the Manitoba Model Forest and Dr. Karen Johnson, former curator of the herbarium at the Manitoba Museum. Peggy Bainard Acheson, Councillor Paul Chief, Carl Smith, John Neufeld, Richard Reeves, myself and others worked hard to complete a plant inventory of the area and to formulate an acceptable proposal to have part of the Brokenhead Wetlands declared an ecological reserve.

We benefited from the help and guidance of Manitoba Conservation staff throughout especially Helios Hernandez and Kelly-Anne Richmond and from the wonderful cooperation and assistance of the Brokenhead Ojibway Nation. They shared their vast knowledge of the wetland with us and we learned so much from them.

We were delighted when in 2005 Premier Gary Doer and former Conservation Minister Stan Struthers announced the creation of the 563 hectare Brokenhead Ecological Reserve and then actually went for a walk in the bog with us that day. 563 hectares, for those of you like me who are not so familiar with metric land measurements, is an area three times the size of Assiniboine Park. Due to increasing demand by Manitobans and tourists to tour the wetland we were concerned about potential damage to it even then. Riverside Gravel generously relinquished a 12 hectare parcel of their quarry lease for the purpose of creating such an interpretive trail and we soon set about to plan how this could be accomplished.

In 2007 we formed Debwendon Incorporated to help preserve this rare ecosystem and later applied for and received Charity Status. Debwendon Inc was made up of representatives from Native Orchid Conservation Inc, The Brokenhead Ojibway Nation and Manitoba Model Forest including Carl Smith as Chairperson, myself as Vice-Chairperson and Dr. Brian Kotak representing the Model Forest. The first thing we did was have architects Hildermann, Thomas, Frank and Cram design the interpretive trail and system of boardwalks. Then we set out to fund raise for this expensive project and to help us with that we made a video about the wetlands, its biology, history and culture called EKO. The last four years have not been easy and the committee often lost heart as we struggled to publicise the project and raise funds. Many generous people helped us but it was a huge project for a small group. I am so proud of the committee for staying with it all these years. It does show what a small group of committed individuals can accomplish if they persist. In 2011 Eugene Reimer, long-time NOCI and Debwendon board member, told us he planned to set up the Eugene Reimer Environmental Fund that would provide annual funding to maintain the Brokenhead Wetland interpretive trail! His incredible love for the wetland was clearly reflected in his generosity which allowed this project to go forward.

Now with your announcement today this project is about to move from a dream to a reality. On behalf of all the plants and animals in the wetland and all of us who love it so dearly, THANK YOU!.”

After the event we visited Eugene at Jocelyn House armed with pictures, video and chocolate cupcakes (the latter two courtesy of Kelly-Anne), a smiling Eugene was pleased for everyone involved and most especially for the Brokenhead Wetlands.

Photography by – Will Milne