Since 2003, there has been an informal committee to plan for the protection and future management of the Brokenhead Wetland area.  Doris and I have been on it representing NOCI; other NOCI directors like Richard & John have also attended some meetings.  The Brokenhead Ojibway Nation has been playing the lead role, including chairperson Carl Smith, elder Lawrence Smith, councillors Bev Smith and Paul Chief.  It also includes Rene Barker from the Hollow Water first-nation, Kelly-Ann Richmond from the Manitoba Protected Areas Initiative, and (did include) Mike Waldram of the Manitoba Model Forest organization.

After this area received Ecological Reserve status in June of 2005, this committee has been focusing on getting a Boardwalk and Interpretive Trail built.  Having a boardwalk in the wet areas will help to protect the sensitive habitat.  It will also protect the visitors, preventing them from sinking and vanishing in the bog (smile). 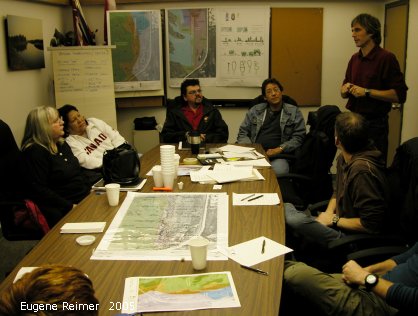 01: here’s part of that committee, at a meeting chaired by Rob Nedotiafko of the landscape architecture firm Hilderman Thomas Frank Cram.  Incidentally, the Brokenhead Ojibway Nation and Manitoba Model Forest provided the money (approximately $15,000) to pay for the design work done by that firm.  Both Mike Waldram and Carl Smith had a lot to do with arranging this funding. 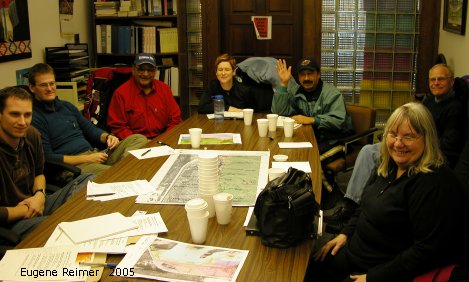 02: the same meeting – from the other end of the room. 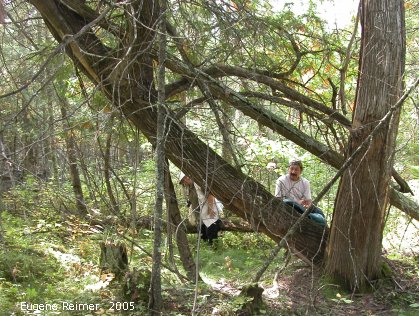 03: In 2005-September, Carl and Doris and I walked the trail with a GPS in order to “map” it.  This is a pleasant spot where we paused for a break. 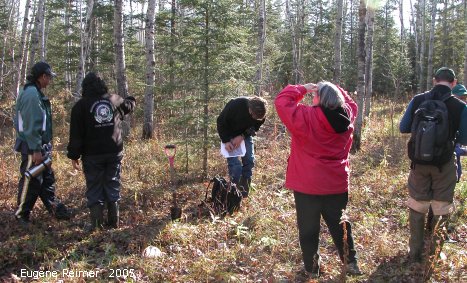 04: In 2005-October, we did another more thorough mapping trailwalk.  This time the 3 young fellows from the architecture firm used maps as well as GPS’s to make sure everything was done correctly and that we stayed within the 100-metre-wide strip. 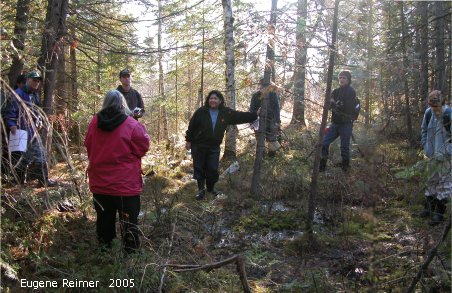 05: This is that group at the south end of the proposed trail, where we finished; we were a weary bunch – at least I was. 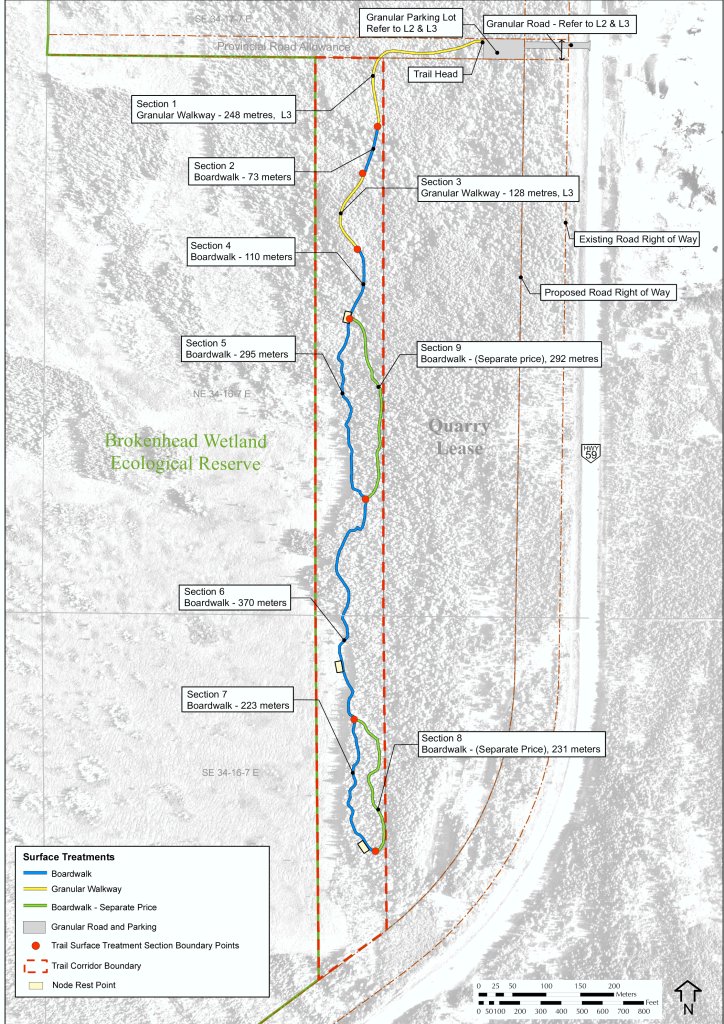 L1-Map: Note Hwy 59, and the curve where we have been stopping and entering the area on fieldtrips in the past, from the south end.  Our new proposed design needs a parking lot, and the Highways Dept would never dream of allowing that sort of “intersection” in the middle of a curve.  Access from the south end is out of the question for many reasons.

Incidentally, the Eco-Reserve is the western portion of this map, also extending further to the west (it’s 560 hectares, or three times the size of Assiniboine Park); everything to the east, til PTH59, had a gravel-lease owned by Riverside Gravel; however they’ve given up the 100-metre-wide strip, outlined in red, which contains exactly those highlights that we’ve been featuring on fieldtrips.

At the north end, on a municipal road-allowance, is the proposed entrance and parking-lot, and where the trail will start.  This first part is mostly dry – the Yellow parts of the trail are where we plan to construct a gravel path (at a much lower cost per metre).  The Blue parts are the proposed boardwalk.  The Green parts are also boardwalks – but these are Optional (later I’ll show Cost-Estimates both with and without these Optional Boardwalk parts.) 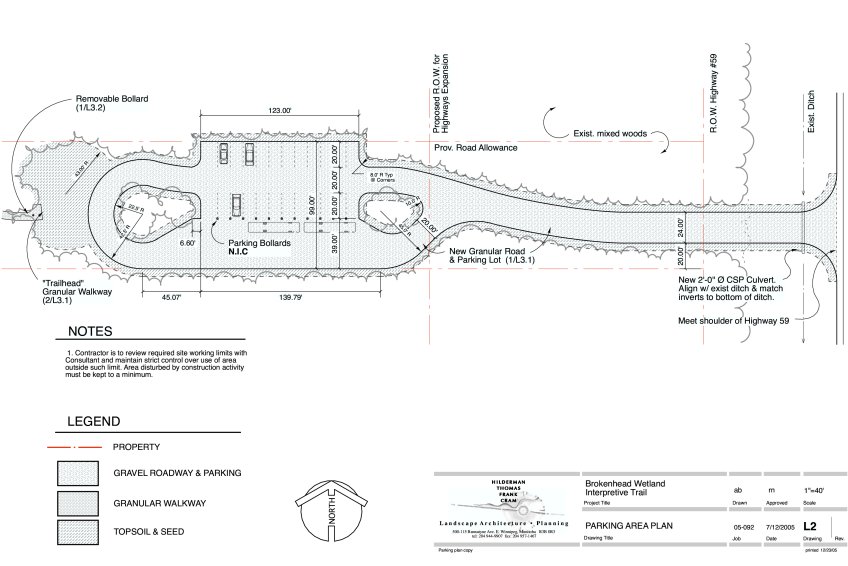 L2-Parking-Area: The parking lot fits entirely within a 99-foot (one and a half chain) road-allowance, has room for about 20 cars plus a few buses, and the U-shaped part allows a long bus to turn around.

L3.1-Granular-Details: The parking lot will get granular base to 12-inch depth; the gravel trail to 4-inch depth. 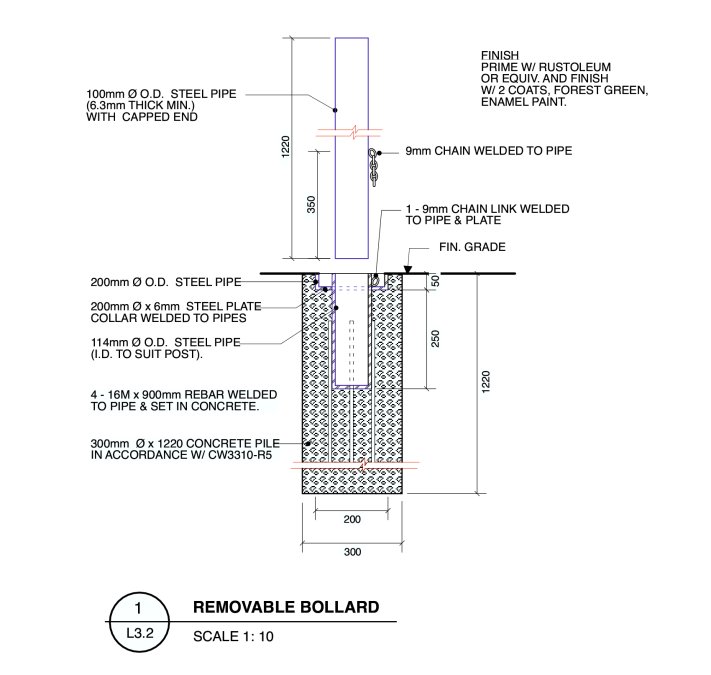 L3.2-Removable-Bollard: This bollard is to prevent access by motorized vehicles; it is removed when maintenance personnel need to use such vehicles. 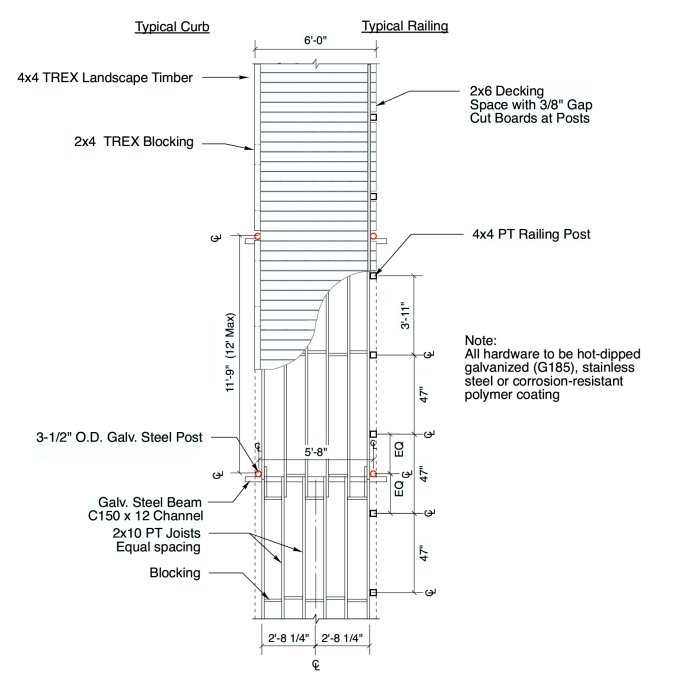 L4.1-Framing-Plan: The framing is much like the floor of a house, using 2×10 joists, with 16inch spacing (approximately).  (The next few slides will show what the joists sit on, and will better illustrate the railings and curbs.)

We have looked at 3 different materials for the 2×6 decking:
TREX (which is made from a mixture of recycled plastic bags and wood waste), or
Cedar, or
Pressure-treated wood.

For the structural parts we’ve only considered 2 materials:
Douglas Fir, or
Pressure-treated wood. 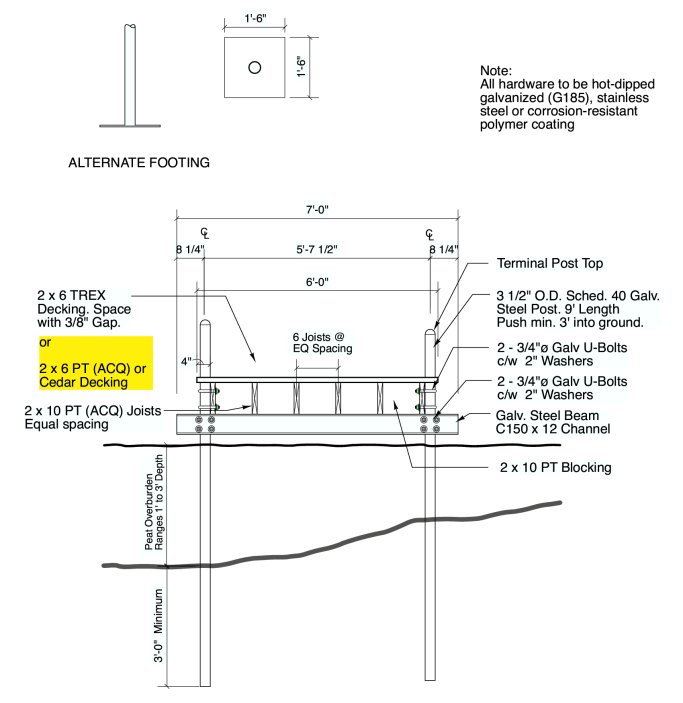 L4.2-Boardwalk-X-section: The x-section view.  The foundation involves 3 and 1/2 inch outside-diameter galvanized-steel posts, which go through the wet peat and at least 3 feet into the more solid ground below.  Each pair of posts is tied together with a galvanized-steel beam and U-bolts; the joists rest upon those beams. 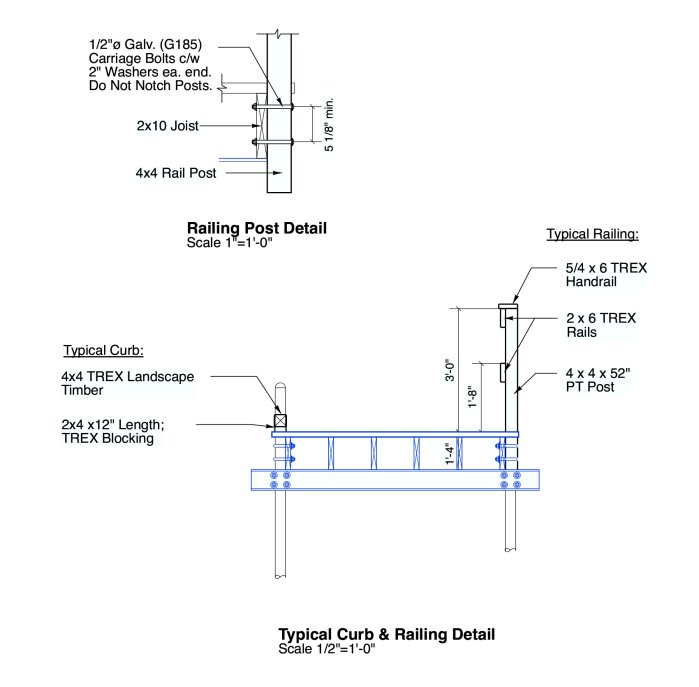 L4.3-Railing-section: Another x-section view, showing the railing and curb details.  The railing uprights are attached with carriage-bolts.  Wherever the boardwalk is so high that stepping off could be hazardous, we’ll have such a railing; where it’s not so high, we’ll have just a curb. 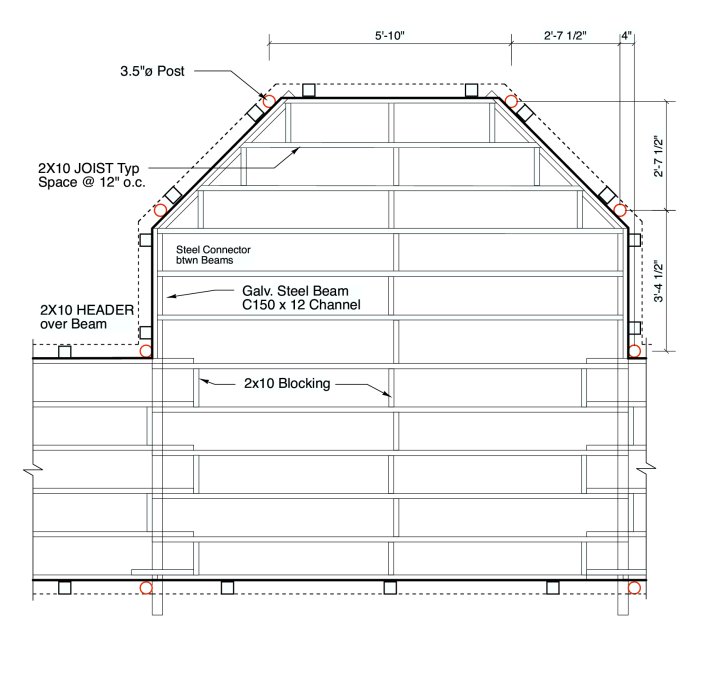 L4.4-Node-plan: Our plan calls for 3 of these “resting-point nodes” situated at places where people might wish to linger.  Such a node is built in much the same way as the boardwalk.

Note that Table-2 provides six different “bottom lines”, broken down by the boardwalk-material choice, and by whether or not we build the Optional Parts of the boardwalk.  They range in price from roughly $600,000 to well over a million dollars.  (None of these include any of the “Part D Optional Site Developments”, which can add up to another $200,000 to any of these pricetags.)
Next Steps:

(i) We see the need to replace our informal committee with a more formal organization – one that is incorporated, and has charity status so it can give donors tax-deductible donation-receipts.  It will look after fund-raising, taking care of the trail during construction, and over its lifetime.  Debwendon Inc (Debwendon is an Ojibway word meaning “trust”) will be that organization.  [As of 2009-January, Debwendon Inc exists and has charity status.]

(ii) We intend to prepare a professional video presentation to present to potential funders.  [As of 2008-January, the video has been completed and can be seen at  EKO video  on Debwendon.Org.]
Conclusion:
NOCI has pledged $12,500 toward the construction of this trail; so it only needs another $606,000.